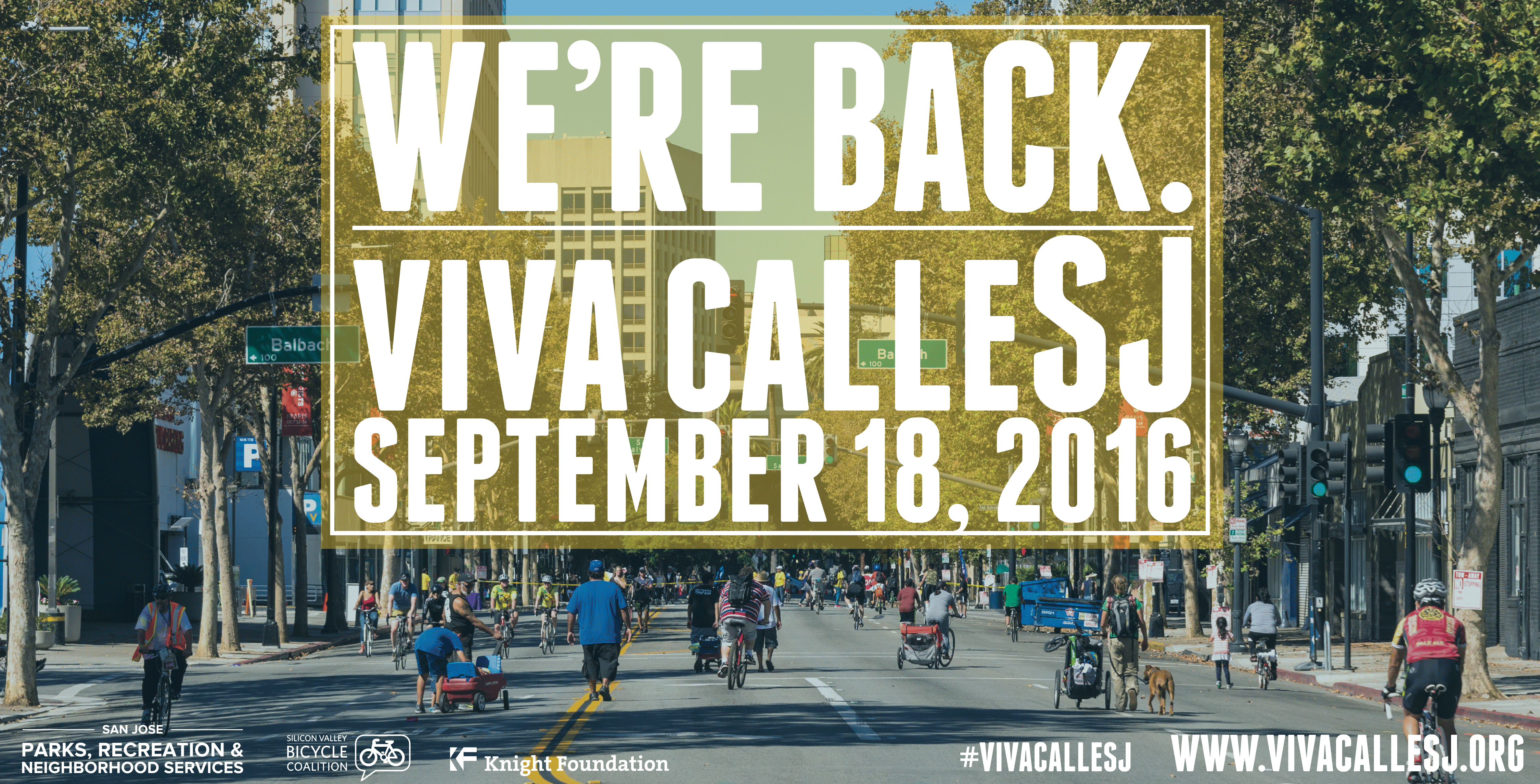 Viva CalleSJ is back for 2016! The City of San José’s Parks, Recreation, and Neighborhood Services (PRNS) has officially announced that Viva CalleSJ, the Open Streetsprogram that last year brought more than 35,000 residents out to walk, bike, skate and play, will return on Sunday, September 18, 2016.

Last October, the inaugural Viva CalleSJ – pronounced “Vee-Va Ka-Ye Es-Jay,” opened up six miles of San José’s city streets, converting them into a vibrant park where participants could explore some of San José’s rich, vibrant neighborhoods from the East Side to Downtown.

For this year’s program, residents can expect a new route and different neighborhoods to explore. The 2016 route will be formally announced as part of National Bike Month in May 2016.

“Programs like Viva CalleSJ allow people of all ages to experience their community in unique and exciting ways,” said Mayor Sam Liccardo. “I’d like to thank the Knight Foundation and Santa Clara County Public Health Department for providing the funding necessary to bring this type of event to our city, and I look forward to seeing tens-of-thousands of our residents out exploring San Jose’s many wonderful neighborhoods once again.”
Based on survey findings, Viva CalleSJ will continue to bring out residents to experience open streets in 2016. More than 86 percent of last year’s participants would “very likely” attend future Viva CalleSJ events, as reported by an independent survey conducted by Silicon Valley Bicycle Coalition and reported by the Mineta Transportation Institute. Nearly 95 percent of respondents received at least 30 minutes of physical activity, and took part in organized activities that included dancing, live music, Zumba, yoga, hula-hooping, exhibits, and food concessions.

The program is led by PRNS, with outreach support from Silicon Valley Bicycle Coalition and funding generously provided by the John S. and James L. Knight Foundation and the Santa Clara County Public Health Department.Viva CalleSJ emulates a number of “open streets” programs from around the world, including popular happenings in Los Angeles; Portland; Guadalajara, Mexico; and Bogotá, Colombia. No motorized vehicles are permitted, and as it is not a race, people of all ages will be able to start wherever they like and go as far as they wish.

“Providing an opportunity for our neighborhoods to connect through such an engaging program not only strengthens individual communities but also instills pride in our diverse city,” said Angel Rios, Jr., Director of the Department of Parks, Recreation and Neighborhood Services (PRNS.) “We look forward to another successful Viva CalleSJ that will strengthen our partnerships and relationships with residents to ensure the long-term sustainability of the program.”

“These events promote and encourage people to replace daily car trips with bicycling, walking, and public transportation, which is an integral part of our mission,” said Shiloh Ballard, Executive Director for the Silicon Valley Bicycle Coalition. “We are glad to partner with the City again for an event that gets people up, moving, and exploring their city by bike, on foot, skateboard, and more.”